So what is beside YOUR bed? 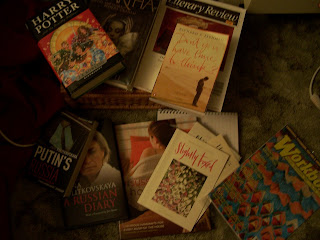 Sorry this isn't that great a picture, I should have used the flash. This is what is next to my bed to read at the moment. Yes, I did clean up the dirty clothes and tissues...but you don' t want to see the TRUE mess? Right so I'm currently reading...of course Harry Potter. Well.....I didn't want everyone to know what happened and let it slip. Underneath that is Martha Grahams biography by Agnes DeMille which is very good. I don't know much about modern dance, nor do I watch it much. But I love to read about people who are originators and she definitely was! It is a really big book, but I'm enjoying it. I also picked up "Don't you have time to think?" letter written by Richard Feynman. He is one of the best science writers I've ever read. In the past I have read his autobiography and have listened to some of his more technical books on tape. They are so fascinating and I just love hearing or reading about science from someone who loves the topic so much. I mean...this man was learning how to pick locks while he was also helping to build the Atomic Bomb. (Just for the record, he like most on scientist on the team regretted their part in how that was used and campaigned against its use.) You would have thought that he would have been using his brain enough for the real work he was doing, not to be fooling around with locks.

So under that is the Literary Review. I really enjoy reading this. It is like Slightly Foxed, in that you get a good idea of what is out there to read. A lot of times I don't need, or wouldn't read the whole book...but I find the reviews so interesting! Under Slightly Foxed is a new knitting book I bought and next to it is the new Workbasket that came in. Can't forget the crafts.

The last two books have been really setting me alight learning. They are both books by the assassinated Russian Journalist Anna Politkovskaya. I wanted to read the book that was published shortly after (or before) she was killed, but then I found that she had written two others that they had in, so I didn't buy "A Dirty War: a Russian Reporter in Chechnya." I've started with "Putin's Russia". Then of course I couldn't leave it there, so at work I've got a couple books about Russia history in the last decade and also about Politics since Stalin, just to kind of help me. So....what is beside your bed? Leave a link in the comments so everyone can see!
Posted by Unknown at 6:48 pm 3 comments: Links to this post

What is up with me??? I promise I have been reading, but I've had so much studying and stuff to do, I haven't had the time to write. Since I love to write, that means something. I let you in on a little secret, I've had a struggle with my reading. I got Bored...I NEVER GET BORED of reading. But I tried to do something that wasn't very smart for ME (not everyone is like this). I stopped reading what I wanted to read, and took suggestions from too many people. Not so much people in blog land, but more in my personal life. I do better if I really feel passionate about what I'm reading. I read for my moods. If I'm feeling sad and depressed, I'll read a mystery or maybe Barbara Pym. If I'm feeling lazy, I'll read something about a dancer or athlete. If I'm feeling smart I'll read a book about science. I read to learn, to experience new things. So, I'm back to reading from my list of books I want to read.

I will be soon writing a review of: Barbara Pym's "An Unsuitable Attachment" and Martin Cruz Smith's "Wolves Eat Dog". I'm reading at the moment a book about Martha Graham and the letters of Richard Feynman. So I promise to be back soon!
Posted by Unknown at 2:46 pm 4 comments: Links to this post