Arthur and George by Julian Barnes

Well, I won't often post about a book that I didn't finish. But I just couldn't finish this book. It was good and I know that others have really liked it. I just couldn't get past something that kept niggling at me. I thought at first it was that there is a big law court case in the middle and I don't like to read them. They are to stressful and there is always people lying and back stabbing and the person is usually innocent, so you are all stressed out because things go against them. Even if it straightens itself out later, I just can't deal with the stress.

But as I thumbed through to see what else might happen in the book, I realized what was bothering me. All the women were wimps. Arthur's wife is sick, but never complained so she her illness progresses to where she is more or less an invalid. George's mother is complacent to his fathers wishes and the his sisters is an invalid. I'm not saying that women were a bit like that back then, but every woman? Even Arthur's mistress is excepting of everything that happens to her. They are happy with what ever is their lot. I think that it was a mistake reading this after just finishing Virgina Woolf. This is just to much a Mans Man book for me. I can't deal with it. So I'm not saying it was aweful...it just wasn't for me!

So I'm now reading a strong woman again. Beverly Connors "Skelton Crew" is what I'm reading now. I good archaeology mystery. I'm half way through and it is really good....so look for this post soon...
Posted by Unknown at 9:10 pm 6 comments: Links to this post 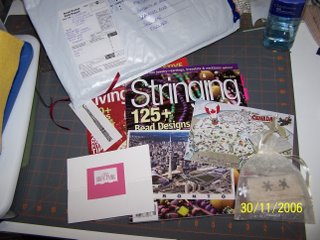 This surprise package came in today from Canada. Heather is better known as Orange Blossom Goddess. She sent me two mags, soap, two postcards and lovely handstamped card and bookmark.

Your the best, thanks Heather!
Posted by Unknown at 9:05 pm 3 comments: Links to this post

The Voyage Out by Virgina Woolf

This book took me a bit to get through, mostly because I was sick in between but also because it has a lot to it. I can see that Woolf spent a lot of time with this book, it is said that she rewrote this many times. She includes so many ideas and thoughts in this your head spins a bit. It definitely isn’t a book that you read just for pleasure. You have to concentrate and keep characters straight. There are a lot of characters, but they all are very distinctive. I don’t know how she does that. She writes through the eyes of many of the characters.

It is mostly the story of Rachel, a girl who has been very sheltered by her father and Aunts who raised her. She has no real idea what it is like to be in a relationship. She has never really experienced anyone that is in one, her Aunts being unmarried and her mother dying when she is young. She is taken under the wing reluctantly by Aunt Helen, who is married to her father’s brother. Helen convinces Rachel’s father to let her stay in the house they are staying in, instead of accompanying him on his work trip. During the voyage and the time on the island they become very close.

I find this books split into two different stories almost, the first the voyage and the second the time on the island. During the voyage Helen and Rachel feel each other out. They at first don’t like each other much and once Helen sorts out how naïve Rachel is, she decides it is her duty to help her become a woman safely. During the time on the island they are more like friends who really care for each other. The other reason I think the book could have been two, is that during the voyage Rachel has an intimate experience with Mr. Dalloway and there is a bit of a ending there. Then on the island they meet all these different people who expand the view of the novel a lot. I’m still amazed at how much Woolf puts in this book. There are ideas about society, marriage, religion, etc. I will have to read this again sometime. Not right now, but one day when I can really take another look at all she says.

I thought it was interesting that you meet Mr. and Mrs. Dalloway in this book. She wasn’t anything like I expected. I didn’t think of her as a society type person. Of course that is because I haven’t read the book yet, and don’t know anything about it. I only really know Woolf by the story or essay “Room of Ones Own”. So reading her has been very interesting.

I’m reading Arthur and George by Julian Barnes right now. It is a bit disappointing only because I don’t like books were there are court scenes. I find it frustrating because the truth always seems to get twisted and you can never be sure if the person really will get off…in this book I’m sure he doesn’t…though I could be wrong. So I’ll be writing about that once I’ve finished.
Posted by Unknown at 9:10 pm 4 comments: Links to this post